My first novel, ‘Hangdog Souls’, has been published — thanks to the wonderful Deixis Press — with striking cover art by the equally wonderful Prasad Natarajan. See this interview for a little more information about the book and the cover. The trailer is immediately below (put on your headphones and drown in that voice!), the blurb and cover art are below that, and reviews are further down still . . . just keep scrolling . . .

Kingdom of Mysore, 1799. A guilt-racked British Army deserter tries to win safety for those he loves – but his reckless bargaining only leaves him trapped between destinies, condemned to facilitate centuries of suicide and murder. Death after death, and each death diminishes him, until — a quarter of a millennium later — a Keralan astrophysicist has the chance to annul the soldier’s Faustian bargain. But Chandy John is weakened by his own burden of grief — will this twenty-first century scientist only become another helpless nexus between undeserved death and undeserved life?

Hangdog Souls is set in the Dravidian heartlands of South India — and in a blurred edgeland where alternative realities elide. Through linked narratives of guilt, shame and the search for absolution, this book takes readers from the arid Tamil plains to the highest peaks of the Nilgiris, and from occult horrors in Tipu Sultan’s kingdom to creeping madness in the world of particle physics. Spanning three hundred years, the stories in Hangdog Souls weave together the fates and fortunes of multiple characters – individuals that echo through the generations, asking always the same question: What weight can balance the death of an innocent?

The cover includes a number of elements relevant to the story; please see Prasad Natarajan’s tweets or his website for an account of how it was developed, and this interview for an explanation of the different elements. 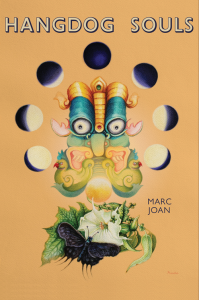 Krysta Winsheimer: “Everything about this book is impressive. Eloquent prose that tells a story with so many levels of human experience… it is dark, grisly, and unsettling in all of the right ways. If you like horror that is thoughtful and atmospheric, you need this book in your life.”

Amazon (5-star): “This book  . . . one of the most well-written I’ve ever read . . . follows a variety of characters over a period of hundreds of years, all tied together by a central storyline . . . engrossing, covering realms of the magical and scientific, as well as themes of irredeemable guilt  . . . you really FEEL the weight of that guilt and the toll it takes on the characters . . . one of those books that you can read several times and each time understand more elements of the story that were lost on you the first time around . . . beautifully-crafted sentences (some of which you had to pause and admire on the way through). Thoroughly, thoroughly recommend. It’s a gem and I’ve never read anything else at all like it.”

Goodreads: (5-star) “. . . an amazing work of cosmic horror . . . as if David Mitchell and Salman Rushdie got together with Robert W Chambers to write the most disturbing and fascinating tale they could.”

Goodreads: (5-star) “. . . an astonishing epic work of literary horror that crosses the boundaries of space and time . . . packed not only with beauty and elegance, but also with creeping dread. In narratives from the far past to the near future, Hangdog Souls explores death and life, philosophy and religion, grief and guilt, physics and metaphysics, torture and love, pain and absolution. This book will change you.”

Goodreads: (5-star) “A very beautifully written, highly original work, with elements of horror, supernatural, science fiction and history. Hangdog Souls opens powerfully with the story of a deserter from the British army, who tries to carve out a life for himself and his family in the perilous world of late 18th century Mysore under Tipu Sultan. He chooses a path which sets the unsettling tone for all the stories to come in this collection of haunting, sometimes harrowing tales set in India. My heart sings when something this accomplished yet idiosyncratic gets published. A true literary curiosity, which manages to leave extraordinary images in the reader’s mind.”

Goodreads: (5-star) “. . .There is a lot to like in Hangdog Souls . . . the greatest compliment I can pay it is that it reminded me of M.R.James. There are some wonderfully choice bits of writing . . . Well worth a read if the idea of Indian-set, century-spanning M.R.James tickles your fancy.”

Ends of the Word Book Blog: ” . . . a complex and wildly ambitious novel which makes no apologies for bringing together contrasting genres and influences – from historical fiction to the Gothic, from intergenerational family drama to “realist” fiction, from supernatural horror to sci-fi, all infused with elements of philosophy, myth and spiritualism and conveyed in rich and beautiful prose.  Hangdog Souls is quite unlike other novels I have read recently. If I were pressed by an intrigued potential reader to compare it to other novels, just to give an idea of its “feel”, two books come to mind:  David Mitchell’s Cloud Atlas with which it shares its polystylistic, segment-based approach and Sarah Perry’s Melmoth, which also features a Faustian or “Wandering Jew” figure in the context of a heavily metaphysical Gothic novel.  But it must be said Marc Joan is also very much his own man.  Kudos to independent publisher Deixis Press, purveyor of “fiction with a dark shadow”, for bringing to life Joan’s original vision.”

Peter Haynes:  “Hangdog Souls by Marc Joan, a centuries-spanning journey through grief and guilt. In turns uncanny, tender, beautiful, horrific, this is a real treat of thematically linked stories. Bravo to @MarcJoan5 and to @DeixisPress, another indie doing The Good Work.”

India Today (Reviewer: Srimoyee Chowdhury): “It is quite hard to sieve out novels that can infuse the horror genre into a backdrop that can purely be classified as historical fiction. That’s where Marc Joan’s fascinatingly inventive novel comes in, like the slightly chilly breeze that heralds the arrival of winter during autumn – dark and full of secrets . . . Hangdog Souls is riddled with mysteries, the darkest of human emotions, and it is a book that will instigate curiosity, yet send a shiver down your spine each moment you turn a page.”

Strange Horizons Magazine (Reviewer: Prashanth Gopalan): “Hangdog Souls by India-raised British biochemist-turned-novelist Marc Joan served up an intricate meditation on time, fate, and multiverse theory rooted in occult Indian spirituality, while also doubling as an entertaining cosmic horror novel adapting the culture of South India for fans of the Lovecraftian genre. To someone of South Indian descent raised at the intersection of Indian and Western cultures, it was refreshing to see elements of my cultural background expressed with verve, nuance, and inventiveness, without a heavy imprint of colonial moralism—and to encounter Lovecraftian-style horror expressed through a culture that has yet to be more widely explored by mainstream speculative fiction and fantasy writers. It was definitely the absorbing winter escape of a read that I had been seeking.”

Forty years ago, Joki de Souza disappeared in the jungles of southern India, during the Hindu festival of Nag Panchami. He was, perhaps, a little too conscientious; perhaps also a little too incautious. But how could poor Joki have known the meaning of wet garlands draped over a black idol? And how can we? After four decades, the full facts behind Joki’s death may never be disinterred – yet something of his story whispers to us still…

“A brilliant piece of writing — one of the most vivid pieces of weird fiction I have read in a long time . . . captured the atmosphere of India splendidly, and builds to a powerful climax.” S.T. Joshi, leading authority on Lovecraft, Bierce, Mencken, and similar writers, and prolific editor of weird fiction anthologies: S. T. Joshi

“Marc Joan’s “The Speckled God” is a mysterious tale of young men and missteps, whose secrets reveal themselves like the blossoms of a garland. Its prose is assured, and its sense of place vivid and lush with descriptions of Mansholi’s various microcosms. Joan deftly forges a believable world before twisting it subtly and thoroughly askew. Your own world is sure to follow.”— Simon Strantzas, author of BURNT BLACK SUNS

“The Speckled God is a rare book; one which, despite the straightforward nature of its plot, manages to excel by taking us, the readers, to entirely new and unexplored realms. In western literature books about post-colonial India are rare, [which] adds to the strangeness of the story…The reader will find no cultural stereotypes here, and Joan is to be congratulated for exploring his world in such a fashion. The story is told in true gothic tradition … and carries readers along at a good pace. Highly recommended.” ANDROMEDA SPACEWAYS

“Go read this story. I loved it in so many ways… There is a sleight of hand Joan employs that brings my mind back to the story again and again… The Speckled God will leave you thinking and then reaching for the next title in Marc Joan’s catalog.” Lit Reactor

“…a fascinatingly weird take on Kiplingesque fiction. It reads almost like a blend of Rudyard Kipling, H.P. Lovecraft and Robert Aickman with a touch of old-fashioned mystery fiction… I enjoyed this novelette so much that Marc Joan found his way on my reading list. I intend to take a closer look at his stories…” Rising Shadow

“I have no hesitation in recommending ‘The Speckled God’ . . . an excellent one-sitting read. Elegant modernist technique, fine descriptive writing of conditions in India . . . subtle weird fiction of the first order.” The Supernatural Tales Blog

“Marc Joan is a new author to me, but I’ll be looking up his other work, because wow, can this guy write! Not only does his prose feel like that of a seasoned writer, but the construction and pacing of this short tale worked perfectly for me. Marc Joan infuses his story with a wonderful taste of India, with its vast jungles, tea plantations and village secrets … he was raised in India, which is probably why this story feels so authentic.”  Books Bones Buffy

“The story is a gripping thriller very much in the vein of Robert Louis Stevenson … Joan brilliantly draws the reader along the thin line between ill-fated accident and supernatural revenge, perhaps leaning more towards the latter than the former.” Shoreline of Infinity