Forty years ago, Joki de Souza disappeared in the sweltering jungles of southern India, during the Hindu festival of Nag Panchami. He was, perhaps, a little too conscientious; perhaps also a little too incautious. But how could poor Joki have known the meaning of wet garlands draped over a black idol? And how can we? After four decades, the full facts behind Joki’s death may never be disinterred – yet something of his story whispers to us still…

“A brilliant piece of writing — one of the most vivid pieces of weird fiction I have read in a long time . . . captured the atmosphere of India splendidly, and builds to a powerful climax.” S.T. Joshi, leading authority on Lovecraft, Bierce, Mencken, and similar writers, and prolific editor of weird fiction anthologies: S. T. Joshi

“Marc Joan’s “The Speckled God” is a mysterious tale of young men and missteps, whose secrets reveal themselves like the blossoms of a garland. Its prose is assured, and its sense of place vivid and lush with descriptions of Mansholi’s various microcosms. Joan deftly forges a believable world before twisting it subtly and thoroughly askew. Your own world is sure to follow.”— Simon Strantzas, author of BURNT BLACK SUNS

“The Speckled God is a rare book; one which, despite the straightforward nature of its plot, manages to excel by taking us, the readers, to entirely new and unexplored realms. In western literature books about post-colonial India are rare, [which] adds to the strangeness of the story…The reader will find no cultural stereotypes here, and Joan is to be congratulated for exploring his world in such a fashion. The story is told in true gothic tradition … and carries readers along at a good pace. Highly recommended.” ANDROMEDA SPACEWAYS

“Go read this story. I loved it in so many ways… There is a sleight of hand Joan employs that brings my mind back to the story again and again… The Speckled God will leave you thinking and then reaching for the next title in Marc Joan’s catalog.” Lit Reactor

“…a fascinatingly weird take on Kiplingesque fiction. It reads almost like a blend of Rudyard Kipling, H.P. Lovecraft and Robert Aickman with a touch of old-fashioned mystery fiction… I enjoyed this novelette so much that Marc Joan found his way on my reading list. I intend to take a closer look at his stories…” Rising Shadow

“I have no hesitation in recommending ‘The Speckled God’ . . . an excellent one-sitting read. Elegant modernist technique, fine descriptive writing of conditions in India . . . subtle weird fiction of the first order.” The Supernatural Tales Blog

“Marc Joan is a new author to me, but I’ll be looking up his other work, because wow, can this guy write! Not only does his prose feel like that of a seasoned writer, but the construction and pacing of this short tale worked perfectly for me. Marc Joan infuses his story with a wonderful taste of India, with its vast jungles, tea plantations and village secrets … he was raised in India, which is probably why this story feels so authentic.”  Books Bones Buffy

“The story is a gripping thriller very much in the vein of Robert Louis Stevenson … Joan brilliantly draws the reader along the thin line between ill-fated accident and supernatural revenge, perhaps leaning more towards the latter than the former.” Shoreline of Infinity 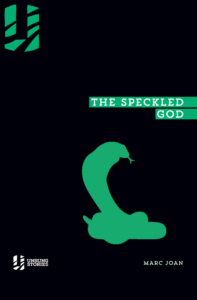